Rubber wear liners are an essential component on steel fabricated mining equipment, providing a resilient, sacrificial layer, which protects the steel equipment from abrasion wear during ore handling operations.  The wear liners are replaced periodically and extending the periods between replacement is a critical need to maximise throughput at the mine.

The bucket wear liners were installed at a major iron ore producer’s load-out facility in the West Australia Pilbara region beginning in mid-2019.  A standard wear liner and a graphene enhanced ArmourGRAPH™ wear liner ran simultaneously in the same location for the 62-week period.

The ArmourGRAPH™ liners, manufactured by newGen Group, had been prepared using a low addition rate of PureGRAPH® 20 in hot cast polyurethane (PU).  The PureGRAPH® enhanced liners were used side by side with standard PU liners throughout the 62-week trial before being returned to newGen Group for assessment. Figure 1 shows images of the liners as fitted in a reclaimer bucket after they were removed from service.


A detailed measurement of wear rates was carried out as shown in Figure 2. An Elcometer 456 thickness gauge was used to determine the liner thickness at each point. The results are summarised in Table 1., below. 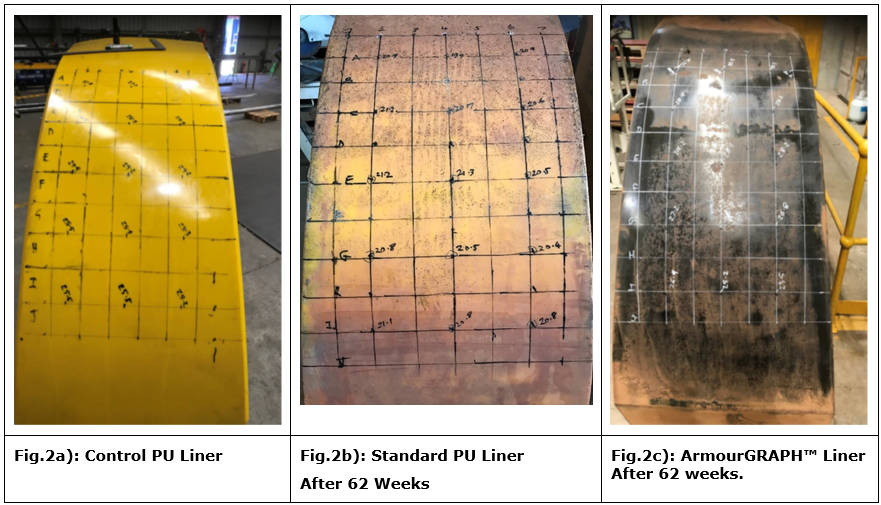 The detailed abrasion analysis reported in Table 1 confirms that the abrasion loss is significantly reduced in the PureGRAPH® enhanced ArmourGRAPH™ liner, with a ~6x reduction in average abrasion loss (improved resistance to wear). As abrasion loss is the primary mechanism of failure, a significant 6x increase in lifespan of the wear liner is anticipated.

The abrasion analysis was performed on the rear sliding face of the bucket liner as this surface is well fitted to the steel bucket and provides the most representative analysis of liner wear life.

“Reducing production downtime is major area of focus in mining and these results show the significant improvements that can be gained from adding small amounts of PureGRAPH® to polymer formulations,” Mr Bell said.

newGen Group Managing Director Ben Walker, added: “The results of this extended trial prove that our ArmourGRAPH™ liners can deliver vast improvements for operators. We anticipate strong demand for a broad range of graphene-enhanced consumable products across the mining and mineral processing sectors.